Showing my age a little, hopefully it will be worth it!
Lately both of us are becoming used to the idea of being extra careful regarding the food we eat. Prices right now seem to be going up for staples, bread, flour, cereal, veg meat and milk. We like a variety of food and appreciate the fact we live in a country where there has been plenty of it.

Somehow along the way things have changed so much with eating habits: working parents not having the time to cook because of their stressed lives. It is very sad to realize fast food has almost become the norm along with rampant obesity. It turns out Mum's worry that we would never grow up normally because of  the shortage of food due to rationing  was ill-founded and , boy if she could see some children of today she would know she did a great job bringing us up and teaching us how important it was to eat our veggies and value each meal.

We both had a moment looking back to our early childhood when we had just enough food to keep body and soul together. Mothers were ingenious at finding ways to make ends meet. Although very young I always knew when mother would try to encourage me, by saying tonight we are having a treat. Offal back then was used a lot more than it is today, and my instinct would kick in and would know it would be something I didn't like, stuffed heart, stuffed marrow or faggots and peas ( a West Country delight of liver, lights onion and bread crumbs made into little balls and covered in caul the lining of a stomach!) When this was served and I managed a bite or two the reward would be a dessert of pink blancmange in the shape of a pear from a mold. Another delicacy of the time bought at the pork butcher was something called chitterlings boiled usually with a little malt vinegar poured over pepper and salt, chitterlings are the pigs inners! I managed not to be around when that was on the menu for tea. Tripe and Onions poached in milk another goody! I don't know of anyone these days delighting in the old traditions

For me (John) rabbit was on the menu at least once a week, very good too when cooked in a pie, I can remember the local butchers shop with dead rabbits hanging in the window!

Kids were privy to orange juice and dried eggs, which came from the USA. Dried eggs could be reconstituted and made into many meals, orange juice was a teaspoon mixed with water, cod-liver oil once a week was given too and  at weekend a good dose of syrup of figs (yuk) all to keep the growing generation healthy as possible,. A small bottle of milk each day at school was mandatory. Crates would be delivered to the school and handed out at morning break, in summer would be slightly warm and winter ice would form on top, difficult to drink that way! There were no refrigerators back then. 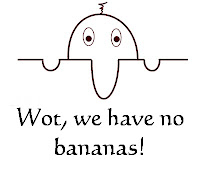 When things got back to normal and food in better supply I was to find out what an orange or banana looked and tasted like! When the Vegetable shop put a notice up “Oranges Now In” there would be a rush to the shop with ration books in hand. We stood in a queue waiting patiently, one orange allowed per family member, same with bananas. Many a time I would have to run to the shop ahead of mother and stand in line to make sure we had a chance to get our ration before they sold out! I can remember the first taste of an orange and still it makes my mouth water just to look at them, with bananas I was very suspicious after mother yelled before I took a bite “Wait you have to peel it first.” I found it an interesting flavour but a bit weird when it was in my mouth.

Glorious food how precious it was back then, and our only fast food was the local fish and chip shop,  always on Friday we would have cod and chips lots of malt vinegar and salt, wrapped in newspaper to take it home as fast as we could to enjoy it. Always a treat and even more so nowadays that cod is a luxury becoming almost extinct!

People seem to have lost so much interest in cooking now that there are so many restaurants and fast food chains to tempt people not to cook at home. So I bless the Food Channel and particularly Jamie Oliver who crusades in many countries trying to encourage folk to get back to basics and actually cook fresh food and to enjoy every morsel even if it is just a couple of times a week!.

Today we are having a traditional Sunday dinner: roast lamb with mint sauce!
Don’t turn up your nose it is very delicious!
Posted by J & B at 12:03 PM