Lots of fun and frustration, but I guess all painting attempts are such!
Earlier in the year we decorated our bedroom after the roof leaked and destroyed a wall, but we had a new roof installed and the wall was rebuilt. Then the colours for the walls and bedding and drapes were carefully picked after much "discussion". 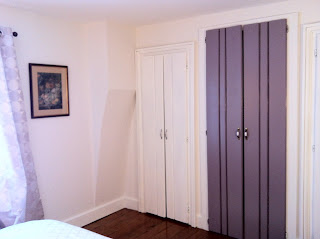 The colour scheme is green, purple, white. We had a big sheet of thick masonite which was used as paint tray to stop slops on the floor. So with a brilliant stroke of genius, the wife suggested we paint a picture on it using wall paint, the chosen subject was Irises, using a painting I did a couple of years ago as inspiration, and that we would both work at it.

Well that didn't happen the housepaint is not easy to mix etc, and herself got into painting horses and had no interest in flowers anymore.

So I, brave soul that I am, got out the acrylics and began a journey, with the board flat on the table I sketched, and daubed and using iris pictures from our garden and from a friend's pictures of Iris in his Texas garden (thanks Mike), and some imagination for the leaves and background.

The picture will be hung in the bedroom when we have worked out a method of framing - I just found out one end is 1/2" longer than the other!
John
Posted by J & B at 10:41 AM